Results for Switzerland from the Global Entrepreneurship Monitor 2018/2019 (GEM)

Despite a mature start-up culture, the rate for founding businesses in Switzerland remains below average (8.5%) when measured against comparable countries (9.2%). When a company is successfully founded, it brings expectations of high growth in recruitment numbers on one hand. From another perspective, few Swiss business people give up on their founding projects. These are two Swiss-related results in the latest Global Entrepreneurship Monitor (GEM), the largest international study on entrepreneurship. The 2017/2018 edition was written by the School of Management Fribourg (HEG-FR) with its partners SUPSI, Swiss Start-up Factory (SSUF), and the Swiss Economic Forum (SEF). 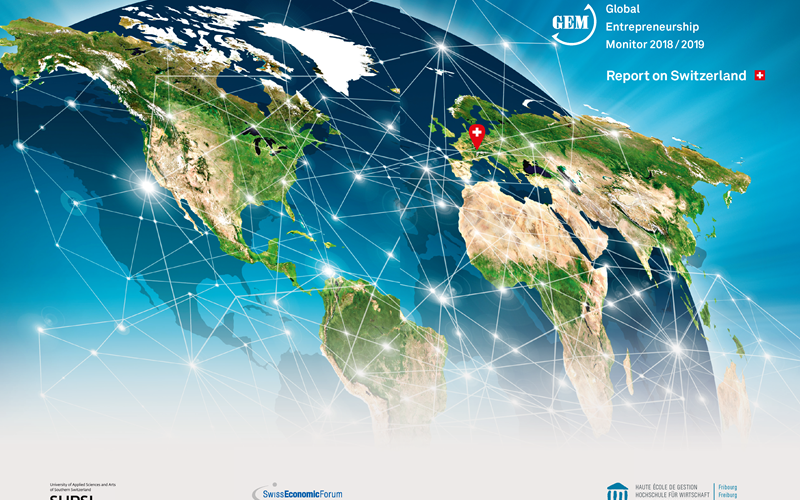 More than 2,400 people were surveyed across Switzerland. Switzerland enjoys better conditions for founding a business than in comparable countries. Nevertheless, only 8.5% of Swiss business people have plunged into entrepreneurial activities in the past. While this is a slight increase over last year (+ 0.3%), it is still below average for comparable innovation-based economies (9.1%) such as the United States, Canada or Australia. Meanwhile, the founding rate has risen by 1.2% since 2015.

When compared internationally, it is apparent that ideas for launching businesses in Switzerland are high quality. The proportion of companies which start up due to good opportunities is above average (67.6%), while those stemming from necessity account for only 13.9%. This explains why founders tend to have high growth expectations: one-third would like to hire six or more people in the next five years. This is not only the highest value for all European countries, but also the highest result since Switzerland joined the GEM project. On the other hand, only 1.1% of founders put an end to their entrepreneurial projects. The rate of established founders (defined as having been in the founding process for more than 3.5 years) is, at 10.5%, considerably higher than the average of comparable countries.

Entrepreneurship is growing as a career choice

As in previous years, the Swiss are rather confident about their entrepreneurial abilities, combined with only a 29.5% fear of failure. In 2017, 42.1% believed they had enough experience and skills to start their own business. But entrepreneurship is an option for the minority: 53.0% of the population consider it a good career choice. In the Netherlands, this number stands at 81.0%, 65.6% in Canada, and 65.2% in Israel. However, only 10.5% of the Swiss intend to take on entrepreneurial pursuits over the next three years. This level is higher than in 2016 (7.9%), but well below average for innovation-driven economies (15.2%). A career in entrepreneurship seems to be gaining more acceptance among the Swiss population, but internationally its level of attractiveness does not yet rank at the top.

Inspiring the youth: a challenge

The transition to entrepreneurship remains problematic for young people between the ages of 18 and 24: only 3% are currently involved in founding a company or leading a start-up. This puts Switzerland 23rd (out of 24) when compared with similarly innovative economies, such as Canada (17.2%), the United States (11.4%), and the Netherlands (11.2%). This raises the clearly justified question of whether entrepreneurial incentives and training are introduced too late in Switzerland. Rico Baldegger, Director of the School of Management Fribourg comments: „Young people should develop confidence in their entrepreneurial activities and gain the courage to initiate. The success of our summer camps, ADOpreneurs, which we have been organising since 2016 for young people between the ages of 13 and 16, clearly indicates that young people are waiting for such opportunities.” The recently held Summer Camp «SEF Next Gen» of the Swiss Economic Forum, would be a logical continuation for young people aged 16+.

From a gender perspective, an analysis of the situation is revealing: women today are less willing to engage in entrepreneurial activities than ten years ago. From 22.9% in 2003, the quota rose to almost 50% between 2011 and 2014 – making the number almost on a par with men. In 2016 this percentage fell to 32.2% and was only marginally better in 2017, at 35.4%. This could be due to the financial crisis of 2008, which caused women to found businesses “out of necessity”. Moreover, the situation on the labor market has visibly recovered in the last few years, and may be the reason for women cutting back on their entrepreneurial ambitions. The work-life balance could also be a factor in this striking decline. Furthermore, the choice made by female entrepreneurs in terms of career and study program affects their status, so that they receive less support. Start-up support is geared more towards tech start-ups, resulting in a lower likelihood of women founders being assisted.

„Young people should develop confidence in their entrepreneurial activities and gain the courage to initiate. The success of our summer camps, ADOpreneurs, which we have been organising since 2016 for young people between the ages of 13 and 16, clearly indicates that young people are waiting for such opportunities.”