Louis Jacques Filion: ‘An entrepreneur is an artist who takes action’

‘Artists have much to learn from entrepreneurs, but entrepreneurs can also learn a lot from the world of artists,’ believes Louis Jacques Filion, who has covered extensive ground examining both traditional entrepreneurs and those who come from the arts. His interest lies in the creative industries, a field little explored by his peers. In a collective publication, he has compiled case studies that shed light on this proximity and also on the complementarity that exists between artists and entrepreneurs.

If entrepreneurs could retain just one piece of advice from artists, it would be to dream, says the renowned researcher: ‘Dreaming, following your intuition, not allowing yourself to be stopped because you think it’s impossible. Artists generally have broader limits than entrepreneurs do, even if those limits often seem less realistic.’

For their part, artists can also look to entrepreneurs for inspiration. ‘If artists want to share their art, they’re well advised to adjust to the specificities of the market in which they operate,’ suggests Filion, a connoisseur of the arts who makes frequent contact with creators. This is a step that professional artists sometimes have trouble accepting and adopting. Filion recalls the outcry caused during a presentation to arts students when he advised them to take inspiration from entrepreneurs in order to better adjust to their potential market. ‘Many of them raised their hands in protest: “Professor, do you take us for prostitutes? The world must discover our art, our talent. It’s not up to us to adapt, the public has to discover us.” That’s a very common attitude among artists.’

But if they want to share their art, artists must, as Filion so beautifully puts it, ‘add a few drops of extroversion to their often very introverted artist’s soul in order to draw the public’s attention and interest to their creations.’ And they must learn to choose their advisers well. To achieve greater prosperity, inventors of products would do well to follow the advice of an innovator of processes, as excellently demonstrated by the Jazz Ballets of Montreal. Founded by two dancers, Eva von Genscy and Eddy Toussaint, the development of the ballets was taken on by a third partner (herself also a former ballet dancer), Geneviève Salbaing, who became a process entrepreneur for that purpose. The troupe achieved prosperity and secured outstanding international acclaim thanks to Salbaing as well as her network, organisational skills, and flair for spotting opportunities.

The fact remains that prosperity is difficult to attain for the majority of artistic enterprises. The main objective for many is gaining recognition for the work of one individual working on his or her own behalf, known as an autopreneur. If autopreneurs take other artists under their wing, the autopreneur becomes an otherpreneur. Often, though, development will remain modest. ‘More than 90% of businesses exhibit a low level of innovation,’ according to Filion, ‘and enterprises in the arts are no exception. The enterprise provides its creator with work but doesn’t make much profit. So in that case we have an independent worker who creates a micro-enterprise in order to practise his or her art and maintain a certain lifestyle at the same time.’

Fewer than 10% of businesses demonstrate a substantial level of innovation. When innovation generates sufficient surplus, the director can hire staff, delegate tasks and pursue corporate development. ‘The manager then works on developing the business while the others take on operations in the business,’ explains the professor.

The famous Cirque du Soleil, which is to be the subject of the prolific author’s next book, is among the rare businesses within the arts to boast a high rate of innovation. The exponential growth of this entertainment company (44 permanent shows in 2020) is largely explained by its creators’ detailed understanding of the contexts in which it operates. ‘In three decades, these acrobats have transformed the culture of Las Vegas, which used to be a city of gambling and prostitution, and they’ve turned it into the world’s family entertainment metropolis. The creators of Cirque du Soleil are not all artists, they’re a mix of show organisers who recruit artists,’ explains Filion. ‘But, in reality, relatively few artists become autopreneurs.’

With this work, Louis Jacques Filion sought to break the ice and kindle the interest of practitioners, researchers and students alike in the world of artists, creators and entrepreneurs. Presenting examples of businesses from Quebec’s vibrant creative scene in fields including design, cinema, publishing, theatre and art galleries, the authors strove to better understand the entrepreneurial dimension of artists and the artistic dimension of entrepreneurs. 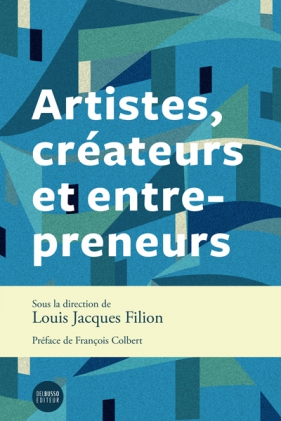 The magazine of the School of Management Fribourg (HEG-FR) provides its readers with information about life at HEG-FR, informs about teaching and research and offers reports, news and interviews with personalities from politics, culture and economy. You can subscribe to the magazine in print for free.​​​

Entrepreneurship in Switzerland: Why people start or run a business - Results of the GEM 2019/2020 (Switzerland)
Back to news list
Teach different! - HEG-FR Magazine